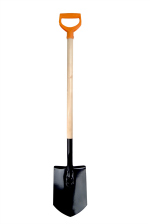 A spade has scoop with a pointed tip which helps to break the ground when you dig into it.  It makes digging a hole much easier and still lets you scoop out a lot of soil at once.  The top of the metal scoop is folded over so that you can put your foot on it allowing you to put your weight behind it when trying to get through grass or hard ground. 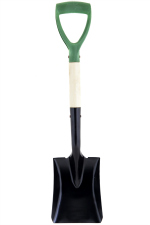 A shovel has a scoop on the bottom with a flat end.  This makes it easy to run it along the ground to scoop up mulch, sand and manure that is sitting on a flat surface. It is difficult to dig a hole with a shovel though because the flat end is harder to push into the ground than the point of a spade.  Always wear closed in shoes when using a shovel.

USING A SPADE: To dig a hole, this gardener uses a spade with a point on the tip.  This helps him to cut into the soil before pulling some out.  Notice that he is using heavy boots to protect his feet.

USING A SHOVEL: This gardener is using a shovel to load mulch into a wheelbarrow.  Notice how he bends his knees and puts most of the mulch over the wheel of the barrow to make it easier to push.