Just like your own bed has a blanket, a garden bed needs a blanket too.  But, it’s not called a blanket, it’s called mulch.

Mulch can be made out of lots of material such as straw, lucerne hay, composted leaves or the chopped up bark from trees and is spread over the soil at a thickness of 10cm.

In the bush, Mother Nature makes her own mulch because the trees drop lots of bark and leaves which begin to rot and break down.  Eventually it forms a thick blanket across the soil. 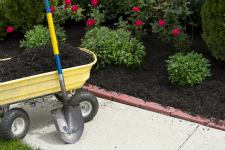 Pine bark is a great mulch for garden beds that have lots of shrubs and perennials planted.  It breaks down very slowly and it is a dark brown or black colour which makes the plants look fantastic.  It only needs to be applied once every 6 to 12 months. 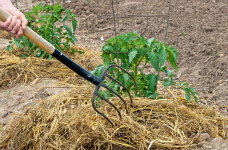 Lucerne hay, pea straw or shredded sugar cane are favourites for the vegetable garden.  They break down fairly quickly but as they do, all the nitrogen and other nutrients in their stems go into the soil and feed the vegetables.  Fresh hay or straw needs to be laid over the vegie garden every 3 months.

SMARTY TIP: When putting mulch on the garden, never leave it touching the stems of the plants as it could cause them to rot.  Make sure you pull it away leaving a space of a few centimetres.