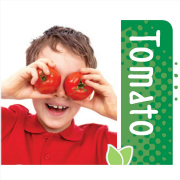 Grosse Lisse is a favourite variety of  tomato that produces lots of large, round red fruit.  It’s names is pronounced ‘gross’ as in toss, and ‘liz’ as in the girl’s name.  A lot of people think it’s an Australian variety but it’s almost definitely not yet it’s still one of the most popular because it produces lots of tomatoes that are packed with flavour.

Tomatoes are scientifically called ’fruit’ because they have seeds and forms from the plant, not as part of a plant. Cooks refer to tomatoes as vegetable because it they are used like a vegetable in salads and savoury dishes.

Choose a spot in the garden that gets at least 6 hours of sun every day. Prepare the garden bed by removing any weeds and then build the climbing frame for the vine. After that, dig lots of compost and organic matter through the soil underneath.  Use a dibbler or big stick to make small holes about 40cm apart at the base of the climbing frame and gently place one seedling into each one, pushing the soil around the roots. Water the seedlings lightly.

Grosse Lisse tomatoes can grow well in a very large tub or pot that is at least 40 to 50cm deep but only one seedling should be put in each one.  There also needs to be a strong climbing frame built in or next to the tub for the vine to climb up.  Fill the container with premium potting mix and plant the seedlings, one in each pot, and water them lightly.

Tomatoes like the warmth so are grown through late spring to early autumn.  Many gardeners plant one crop in late August or early September and then another around the middle of December so that they get a good supply for many months.  Water the plants every day so that the soil is always damp as this will make sure the fruit ripens well. As the tomatoes starts to form, the bush may need a fortnightly application of liquid fertiliser or perhaps extra compost around the roots as they are heavy feeders.

The tomatoes are ready to eat when they have turned red though they will keep ripening in the fridge if they are just a touch green still.  Tomatoes can just be pulled off the vine but always keep a little bit of stalk attached to the fruit so that it stores better.

Tomatoes like Grosse Lisse just need to be washed and chopped up into chunks or slices to use in salads and sandwiches.  They are easier to cut with a serrated knife but it is best to ask an adult to help with this.

Tomatoes can also be cut in half and roasted or grilled which is delicious with bacon and eggs for breakfast or they can be chopped up and cooked with zucchini and onion in a little olive oil.  See our delicious recipe for Spaghetti Bolognese in which tomatoes are the main ingredient in the Smarty Plants Kitchen.

The leaves of tomato bushes are not edible and once the plant has died down, should be thrown into the compost to decompose.

Grosse Lisse tomatoes grow on a robust vine that gets to about 150cm tall and, because the fruit can be quite heavy, it needs a good solid frame or trellis for the vine to grow on or a strong stake that is hammered into the ground.

As the vine grows taller, it will wind itself up the trellis but it can also be tied with stocking to help it stay upright.  After several weeks, small white flowers will form which are called blossoms.  These are pollinated by insects such as bees and begin to form very small fruit.  As the fruit grow, they change from green to red which is when they are ripe and ready to harvest. 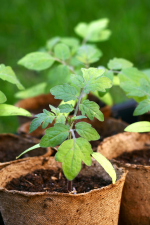 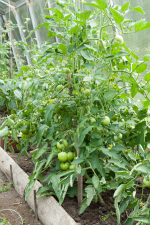 When to Grow: Spring and summer (as well as autumn in warmer areas)

Requirements: Plant in full sun and water them every day. Give the vine a sturdy frame to climb up. Apply a liquid fertiliser every fortnight. Make sure the soil has lots of organic matter and compost in it.