Ok, so they sting, and that hurts, but these are one of the most important creatures on earth since without them, many of our plants wouldn’t get pollinated and then we wouldn’t have food.

European honey bees, which are the orange and black ones that we see in the garden, are one of the most important insects in agriculture because they flit from plant to plant, carrying the pollen from one flower to the next.  Without bees, the flowers of vegetables such as pumpkins, cucumbers and melons would not be pollinated and would never produce anything for us to eat.

To attract honey bees to the garden, there needs to be some of their favourite flowers in full bloom all through the year.  The best bee-attracting plants to include in the garden are forget-me-nots, lavender, nasturtiums, salvia, cosmos, rosemary, sunflowers and of course lots of vegetables.  Bees like lots of variety in the flowers that they visit as well as shallow bowls of water dotted around the garden.

Bee attracting plants will use nectar to entice the bees to stop at the flower and in the process pick up some sticky pollen as well which they carry off to the next flower.  This pollinated flower will then produce a fruit or vegetable.  This is called pollination.

Be very careful when using pesticides in the garden because many of them will kill the bees along with the pests.  It is always best to use non-chemical ways to control pests in the garden.

It’s wonderful to have lots of bees in the garden but if you know that your friends are allergic to bee stings, make sure you let them know before they visit.  If you do get stung by a bee, the best idea is to get a cold pack from the freezer to place over it.  If you don’t have a cold pack, a packet of frozen peas will do the same job!

HOW DO BEES MAKE HONEY?
Bee keepers will keep hives in their fields in which colonies of bees will live.  There will always be one Queen Bee and a lot of worker bees.  The workers will fly off to the flowers that are in the field to collect the sweet nectar which they suck off with their tongue.  They store it in their honey stomach which, luckily, is different to their food stomach.

When they have a full load, they return to the hive.  They pass the honey through their mouth to another bee who chews on it for about half an hour and then it gets passed on to another bee that does the same.  Eventually, most of the liquid is removed from it and it is turned into honey which the bees store in the cells of the honeycomb.  They then fan it with their wings to dry it out even further and when it’s ready, they seal the cell with a wax lid.

It takes eight bees all their life to make one single teaspoon of honey!

HOW DO BEE KEEPERS COLLECT THE HONEY?
The bee keepers will wear a suit so that they don’t get stung and they will carry a can of smoke which they puff over the hive and this calms the bees down.  Once they are calm, the keeper removes a tray of honeycomb and then uses a scraper to take the wax lids off the cells.  If he’s not in a hurry, the tray can just be left hanging over a bowl and the honey will slowly drip out.  But, for a faster result, he can put it in a contraption that spins the honey out at high speed.

The honey can be eaten straight away as bacteria doesn’t grow in honey.  It is very sterile.  Some people even use honey to dip the tips of their plant cuttings in before putting them in the soil to grow. 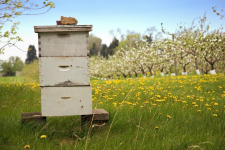 Bee hive in a field. 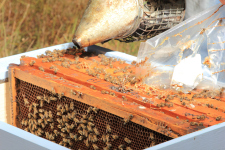 Calming the bees with smoke. 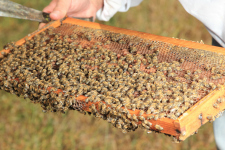 Ready to scrape the lids off. 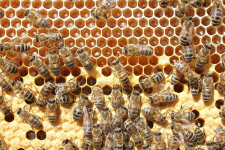