HOW TO IDENTIFY THEM
Caterpillars are the larvae of butterflies and moths.  They can be brown, green and even orange but are often the same colour as the leaf that they are munching on. Some of them are quite hairy but all of them have short, stumpy legs which they use to hold onto leaves and stems. The most common in the vegie garden are the green caterpillars of the Cabbage White Butterfly.

Caterpillars are very good at camouflaging themselves but are usually hiding under leaves or along the edges.  It is easy to tell that there has been a caterpillar on a leaf because there are holes in the leaves and along the edges and there are caterpillar droppings underneath.

THE DAMAGE THEY CAUSE
Caterpillars will either eat the outside edges of leaves which is a tell-tale sign that it was a caterpillar that did the damage. They don’t often eat the whole leaf but will take chunks out of many leaves instead. They make the leaves on plants look ugly and can kill a small seedling if they eat all of the leaves.  Large leaves such as spinach or silverbeet can still be eaten even though a caterpillar has had a munch on it first.

HOW TO CONTROL THEM
Controlling caterpillars can be fairly difficult because the butterflies keep laying eggs but by checking the plants often and picking off any caterpillars they usually don’t get to do much damage. Check under the leaves and around any buds as they like to hide from their predators.  Birds love eating caterpillars so put a birdbath in the garden to encourage them to stay or throw them to the chooks.

There is a spray called Dipel that is available at hardware stores and garden centres which can be used if there are a lot of caterpillars. It is an organic product which is made from a beneficial bacteria that, when it hits the caterpillars, causes it to die but it is very safe for humans and for the other insects in the garden as well.  Even though it is safe, always read the instructions carefully. 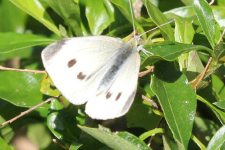 Caterpillars like to chew on the edge of the leaf leaving a rough line.  This caterpillar has a black mark on either side of its body which look like eyes.  That’s to scare off predators who will hopefully think it is a much scarier insect and leave it alone.