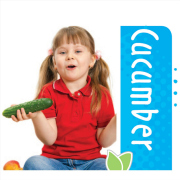 Cucumber grows best in summer which is ideal since it is mostly eaten raw in salads at picnics and barbecues.

Cucumbers grow on a vine which has large leaves which help to shade the fruit as they grow.  The vine will spread over quite a large area or climb a trellis if one is available.  The long, slender cucumbers will grow to around 15cm long and each vine will produce quite a few over many weeks so usually four seedlings is enough for the average salad-loving family.

Cucumber seedlings can be planted directly into a garden bed that has been weeded and which has had lots of organic matter and compost dug through it.  Make sure that there is an area that is at least 100cm x 100cm for each vine to grow into.  This means that, if there are several seedlings to be planted, quite a lot of space is needed as they will need to be planted about 100cm apart.   Choose a spot in the garden that gets at least 6 hours of full sun every day and always water the seedlings lightly after planting.

Bush cucumbers can be grown in very large tubs filled with premium potting mix but there still needs lots of space for the vine to grow.  They will grow up a trellis if one is available.

Cucumbers grow very quickly and because of this they need lots of food.  When they are planted they would have been given lots of compost and organic matter but as they grow, side dressings of fertiliser every four weeks or an application of liquid fertiliser will give them a much needed boost.

The leaves of cucumbers can get affected by mildew which is a white, powdery coating that it seen on the leaf surface.  One of the causes is that the leaves are in shade or the plants being too close together so that they have to compete for sunlight.  Mildew can be controlled but the best thing is to prevent it from even becoming a problem by making sure each vine has lots of space and lots of sunlight.

Cucumbers are ready to harvest when they are around 15cm long.  To do this, use secateurs to cut the stem, leaving some of it attached.  Regularly harvesting the ripe cucumbers will encourage more to grow.  Store the cucumbers in the fridge.

By far the most popular way to eat cucumbers is raw in salads and sandwiches.  It can be sliced, cubed or served in battons.

Cucumber can simply be washed and sliced with the skin on or this can be peeled off with a potato peeler.  A clever tip is to run a fork along the length of the cucumber to make long ridges in the flesh before it is sliced.  This is not only attractive but helps the salad dressing to stick to it.  Plus, when you do this, a very refreshing spray can be felt on your face.

Some recipes such as Asian stir fries use cooked cucumber that has been sliced and deseeded.  Find great recipes in the Smarty Plants Kitchen.

Cucumber vines grow either along the ground or up a trellis and eventually produce flowers.  The female flower is pollinated by insects that have just visited the male flower to collect pollen.  Then the female flower starts to produce the cucumber at its base which grows to a size ready to harvest. 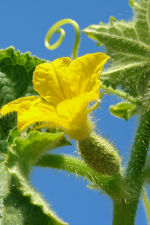 When to Grow: Spring and summer.

Requirements: Plant in full sun and make sure the vines have lots of space to grow into.  Fertilise often and water regularly.

Nutritional Benefits: Cucumbers are very high in water which is why they are refreshing on a hot day.