Hover flies are also known as flower flies because they are seen hovering over them in the garden.  They have sponge-like mouths and they feed on nectar and pollen from open flowers such as daisies.

They are good bugs in the garden because they are attracted to the sweet excretion or honeydew of sap sucking insects such as aphids and lay their eggs nearby.  When the eggs hatch, the hover fly larvae feed on the aphids, thrip and scale and each one can eat up to 400 aphids whilst it is growing into an adult.

To encourage hover flies to stay in the garden, grow lots of plants with large, open flowers such as daisies.  Also, don’t spray chemicals to control other insects as they will kill hover flies as well. 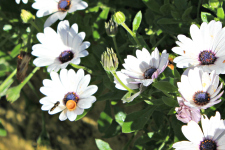 Can you spot the hoverfly?