HOW TO IDENTIFY THEM
Scale are odd shaped blobs that live on the leaves, stem and branches of both outdoor plants as well as indoor plants.  They can be brown, white, orange or black and are all different sizes between 2mm and 12mm across.

They are quite interesting creatures because the part that you can see on the stem is not the insect at all, but a shell that the insect hides under to protect itself.  On some scale, this armour is soft and on others it is quite hard.  Every now and then, the insect lifts up its armour and moves just a little way up the stem so that it can suck more sap.

THE DAMAGE THEY CAUSE
Scale suck the sap from a plant taking away its nutrients.  The plant might be fine for a while until the population of scale gets so high that it starts to look sick and eventually die.

HOW TO CONTROL THEM
The protective shell on scale makes it very difficult to control them with chemicals but this is good as there are better ways to deal with them anyway.  If there aren’t many scale on the stem, they can simply be scraped off with something like a popstick but if there are lots of them, this trick will take hours.  Instead, buy a product called ‘white oil’ or ‘pest oil’ from the garden centre or hardware and spray it over all of the scale so so that they are totally saturated.  By doing this, the oil in the product blocks up the air holes around the shell so that the insect underneath suffocates.  The scale won’t drop off for a very long time, but it will be dead underneath. 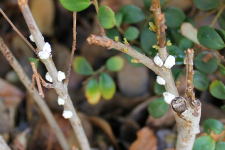 Where there are scale insects in the garden, there are probably going to be ants running around that need to be controlled as well.  Ants love the sweet honeydew that the insects excrete so they ‘farm’ the scale to make sure that they are healthy and keep producing this tasty treat.  If an area becomes crowded with scale, ants will even pick them up and carry them to a different spot in the garden.