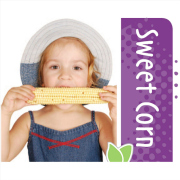 Sweet corn, or maize, is a major cereal crop grown around the world.  It’s used to make bread, breakfast cereals and of course, popcorn!  It’s easy to grow at home in the vegie patch and can get so high that it might end up taller than you!

The sweet corn cob, which is the long cylindrical part in the centre, is covered in tiny corn pieces which are the delicious golden kernels that we eat.  The cob has soft threads running the length of it called silks and the whole thing is neatly wrapped in a papery green cover called the husk.

When we eat corn on the cob we often call it a ‘corn cob’ but actually it should be called an ‘ear’.  Only the hard centre is the cob but when it has the kernels attached, it is an ‘ear’.

Choose a spot in the garden which gets around 6 hours of sun every day and prepare the garden bed by removing any weeds and digging lots of compost into the topsoil. Water the soil and the punnet of seedlings lightly. Use a dibbler or big stick to make small holes about 30cm apart but, remember to make the holes in a group instead of a straight line because this will help the wind to blow the pollen from one corn plant to another.  If the pollen gets blown away from the plants, the corn won’t develop.

Gently remove the seedlings from the punnet and place one in each hole. Push the soil around the roots and water them lightly.

Sweet corn can be grown in a very deep pot (at least 30cm) but several pots should be grouped together to help with the pollination. Fill the pot with premium potting mix and water it lightly. Make small holes about 15cm apart and gently place one seedling in each one. Push the soil around the roots and water them lightly.

Keep the soil moist by watering every day unless it rains.  Apply liquid fertiliser every two weeks. Watch for aphids which can collect on the young cobs as they are growing.

A corn cob is ready to harvest when the silks that poke out of the top turn from creamy white to brown and the ear stands out at an angle from the stem.  Pull off the whole corn by pulling it down and twisting.  To store the corn, leave the husks on and put it straight into the fridge as it is without putting it in a plastic bag.

There are so many delicious ways to eat corn and by far the most delicious is when it is still on the cob when it has been barbecued, boiled or microwaved.  It is so sweet that it doesn’t really need anything else but some people do like melting a little butter over it and adding salt and pepper.

The kernels of corn can also be cut from the cob but this is a job for an adult.  Once that is done, the kernels just need to be microwaved or boiled for just a minute before they are ready to serve.  But they are also delicious in sweet corn soup, fritters and also in savoury muffins.

Check out some of our delicious recipes for using sweet corn in the Smarty Plants Kitchen.

Sweet corn seedlings grow into very tall plants, even taller than some children.  The plants have one single stem with long strappy leaves.

Unlike most other vegetables which are pollinated by insects, sweet corn relies on the wind to bring the pollen from the top of the plant to the sticky silks at the tips of the ear.   Over the next day, the pollen grows a tube down the length of the silk to a waiting ovary and then a new corn cob begins to grow. 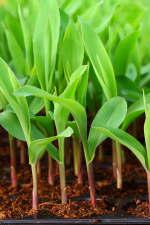 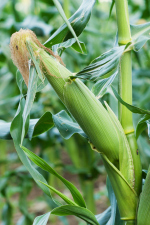 When to Grow: All year round

Requirements: Plant in full sun in a garden bed built up with lots of compost. Water every day and apply a liquid fertiliser every fortnight.