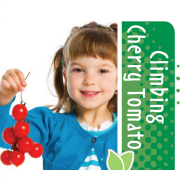 Cherry tomatoes are delicious and much sweeter than large tomatoes.  Plus, they are so small that the whole thing can fit in your mouth at once.  Climbing cherry tomatoes grow on a vine which climbs up a frame and the small fruit grow in a bunch, called a truss.

Tomatoes are scientifically called ’fruit’ because they have seeds and forms from the plant, not as part of a plant.  Cooks refer to tomatoes as vegetable because it they are used like a vegetable in salads and savoury dishes.

Choose a spot in the garden that gets at least 6 hours of sun every day. Prepare the garden bed by removing any weeds and then build the climbing frame for the tomatoes.  After that, dig lots of compost and organic matter through the soil underneath.

Climbing cherry tomatoes need to be planted against something that they can climb up such as a trellis or a climbing frame.  Even a fence covered in wire will do the trick.

Use a dibbler or big stick to make small holes about 30cm apart at the base of the climbing frame and gently place one seedling into each one, pushing the soil around the roots. Water the seedlings lightly.

Climbing cherry tomatoes can grow well in pots and tubs but they need to be quite large and at least 30cm deep.  There also needs to be a climbing frame built in the tub or next to it for the vine to climb up.

Fill the container with premium potting mix and plant the seedlings in small holes about 20cm apart and water them lightly.

Tomatoes mostly grow through the warmer months so they need to be watered every day so that the soil is always damp. As the fruit starts to form, the bush may need a fortnightly application of liquid fertiliser or perhaps extra compost around the roots.

The little tomatoes are ready to eat when they have turned red. The easiest way to pick them is to use a pair of secateurs to cut off the truss of tomatoes, providing they are all red. They can be harvested individually but always keep a little bit of stalk attached to the tomato so that it stores better. Tomatoes that are not quite red when picked will continute to ripen in the fridge.

Some of the cherry tomatoes may not even make it to the kitchen as they are so delicious eaten straight from the bush. But for those that do, simply wash them and scatter them through a salad or cut them in half and put them on a cracker with cheese and a little bit of basil. They are fantastic in sandwiches as well.

Although cherry tomatoes can be thrown into casseroles and spaghetti bolognese, they are wonderful roasted in the oven. To do this, keep them attached to the truss and put them on a baking tray, drizzle over a little olive oil and then some salt and then put the tray in a medium oven for about 10 to 15 minutes until their skin just starts to burst. These are delicious with other roast vegetables and meat.

The leaves of tomato bushes are not edible and once the plant has died down, should be thrown into the compost to decompose.

Climbing cherry tomatoes grow as a vine that climbs up frames or trellises. Once the vine has grown, small yellow blossoms form which are pollinated by bees and other insects.  These then develop the small tomatoes and the flower eventually drops off.  The tomatoes grow on a truss which makes them look almost like a bunch of grapes.  When they first form they will be dark green and change to red which is when they are ripe and ready to harvest. 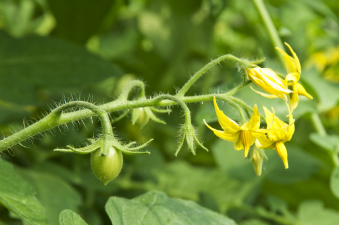 When to Grow: Spring and summer (as well as autumn in warmer areas)

Requirements: Plant in full sun and water them every day. Give the vine a frame to climb up.  Apply a liquid fertiliser every fortnight. Make sure the soil has lots of organic matter and compost in it.