A wheelbarrow is one of the most useful tools in the garden because it helps you move a lot of things around easily.

Most garden wheelbarrows only have one wheel and this makes it really easy to manoeuvre between plants or along paths.  It also has two feet at the back for it to rest on and two handles which you walk between.  It has a bended piece at the front of the wheelbarrow which is what you use as a lever when tipping it forward.

Tips for using a wheelbarrow: 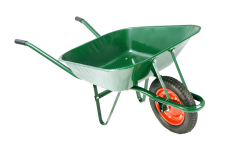