Well, this is confusing.  Should we put slaters into the good bug or the bad bug section?  They can be both!  In the end we put them in with the Bad Bugs because sometimes you can have too much of a good thing.

HOW TO IDENTIFY THEM
Slaters look like tiny grey tanks, scurrying through the mulch and leaf litter in the garden.  They have a shell of armour that is fascinating if you look at it with a magnifying glass; it is made up of pieces that allow the slater to roll up into a tiny ball to protect itself from predators.

Slaters are actually crustaceans which means that they have an exoskeleton or outer skeleton which is their shell.  They have lots of tiny little legs which allow them to move quickly over the ground and they are land-loving creatures that are found in garden beds all over Australia.

They are also called Wood Lice, Pill Bugs or Roley Poleys because of their clever trick of rolling up into a ball and to find them, just move some mulch or leaf litter at the base of a plant and you will probably find them busily running around.  They don’t bite, they are quite safe to touch.

THE DAMAGE THEY CAUSE
This is where slaters can be good or can be bad.  If there aren’t too many in the garden, they are actually great little creatures to have because they feed on the decaying matter that sits on the soil, breaking it up quickly so that it becomes nutrients for the plants.

However, in Australia we put a lot of mulch on the garden to keep the soil moist but slaters love mulch!  They live in amongst it and feed on it as well and, because of this, their numbers have gone berserk and now gardeners all over are complaining because there are too many!

The problem is that slaters also have the annoying habit of chewing at the soft stems of vegetable seedlings and nibbling at  strawberries, melons and other vegetables before anyone else gets the chance to eat them.  In one night, which is when they are most active, slaters can destroy all the seedlings that a gardener has planted the day before.

HOW TO CONTROL THEM
First, you need to decide whether you really do need to control them.  If they are in the garden with shrubs and plants such as roses, Australian natives and ground covers, you don’t need to do anything at all.  The slaters won’t cause any problems  because these plants are big enough to take care of themselves.

However, if there are lots of slaters in the vegetable garden, you will probably need to do something to control their numbers or to protect your plants from them.

To protect seedlings, make ‘collars’ for them until they grow large enough that the slaters won’t damage them.  To do this, cut the top and bottom off plastic milk or soda bottles and push these into the soil surrounding the seedling.  These are slippery and slaters won’t be able to climb up over them.

Chooks are fantastic at controlling slaters in the vegie patch but the problem is, what controls the chooks?  Only let them in for short bursts and keep an eye on them so that they don’t eat the seedlings as well.  A great idea is to let the chooks in to the vegie patch to sweep the ground for delicious bugs before you plant a new lot of vegetables.

Be clever in where you grow plants that have fruit which can sit on the ground.  If you grow strawberries in pots or hanging baskets or encourage melons, zucchinis and cucumbers to climb over a trellis, the slaters won’t be able to get to them.

Keep mulch away from the trunks or bases of plants so that the slaters don’t hang out there and every week, give the mulch a light raking over to disturb their habitat.

Another clever trick is to trap the slaters with oranges!  All you have to do is cut a few oranges in half and suck the juice out of the middle but leave some of the flesh in there too (ok, you don’t have to do this but it is delicious).  Put these oranges with the flesh side down in amongst the vegies.  The slaters will be more interested in these than the seedlings and you can come out in the morning and scrape them into a bucket to feed to the chooks or put into the bin.

Finally, if the problem is really bad, use snail pellets that are also effective against slaters; it will tell you this on the packet.  But, and this is important, use these very carefully with pets as they can be poisonous so follow the instructions on the pack. 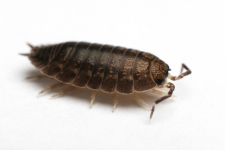 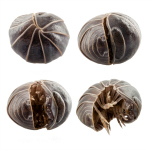