One year of seeds brings seven years of weeds!

Have a think about what that sentence means?  Can you figure it out?

So, the best thing to do is to prevent weeds from getting a hold of your garden in the first place. 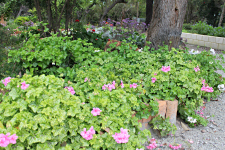 PLANT A LIVING MULCH
A living mulch is really just any plant that grows along the ground; they are usually called ground covers in the garden centre.  Ground covers do the same job as mulch as they cover the ground and grow so tightly that the weeds don’t have anywhere to establish.

TURN THE TOPSOIL
If you don’t have mulch over the soil, it is a good idea to use a garden hoe or a rake to lightly turn over the top few centimetres of the topsoil.  By disturbing the topsoil, it means that any seeds that are germinating get moved around so they can’t put their roots down.

DON’T IGNORE THE GARDEN
Weeds love the garden beds that nobody else does.  If you ignore a garden bed and it’s left to sit for a long time without being looked after or planted into, the weeds will think that you don’t want it and will move in themselves.  And, they are just like unwanted guests.  Once they are there, they just never want to leave.